How can you tell if two ratios are equivalent to each other? This page shows you. Sample problem here. 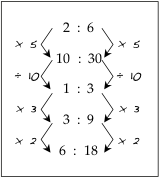 When equivalent ratios are graphed, they always form a straight line that goes through the origin.

To write a ratio in its simplest form, keep dividing both sides by the same number until you cannot go any further without going into decimals.

Yes...because both ratios reduce to

Q3: Which ratio is NOT equal to all the others?

because it reduces to

, but all the other ratios reduce to